The world’s leading fair for the plastics industry provided considerable impetus for sustainable management. IKV presented itself with innovative research in the fields of digitalisation, additive manufacturing and circular economy.

K 2019, the world’s leading trade fair for the plastics and rubber industry in Düsseldorf, came to an end on 23rd October after a period of eight days. According to initial figures from Messe Düsseldorf, the event was attended by around 225,000 visitors from 165 countries who showed considerable interest especially in recycling systems, sustainable raw materials and resource-saving processes. IKV also attracted plenty of attention with its research projects on digitalisation in injection moulding, the further development of infill structures in additive manufacturing, and the plasma coating of small hollow articles.

Research projects on the IKV stand

With its injection moulding project, IKV addressed one of the hot topics of the fair, namely Plastics Industry 4.0. In cooperation with thirteen industry partners, a fully networked injection moulding production cell with data feedback was implemented in a self-learning system of neuronal networks. With the help of artificial intelligence, the setting-up process was significantly shortened and an objective determination of quality data was enabled. In addition, an inline functionalisation of the demonstrator – a housing for Raspberry Pi computers – was carried out through an additively manufactured anti-slip strip of TPU. The visitors were able to watch the process live. All the parts produced at the show were provided with an individual QR code readable by mobile devices. It allowed the visitors to directly read the production data for the respective part themselves. 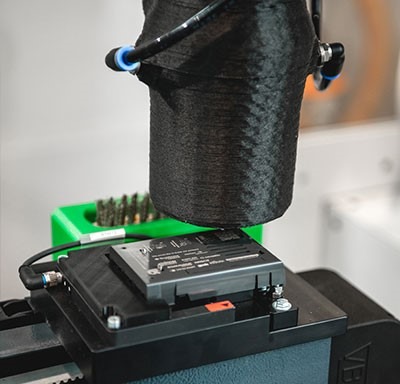 The inline functionalisation of the demonstrator: an additively manufactured anti-slip strip made of TPU | Photo: IKV/Fröls

The team from the additive manufacturing project presented a newly developed software program for the design of 3D infills to suit the load path. Visitors to the IKV stand were able to view the production and effect of different infill structures and to test them live. One demonstration focused on an additively manufactured hexagonal spanner. By carrying out a torque measurement, the visitors were able to compare the stability of parts with 2D and 3D infills under the effect of individual forces. 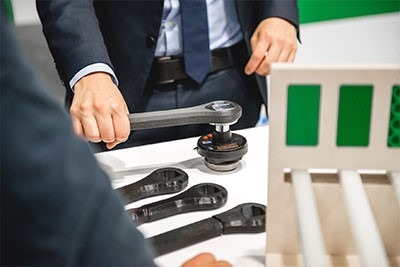 Visitors compare the stability of parts with 2D and 3D infills by means of torque measurements | Photo: IKV/Fröls

The scientists from the plasma and surface technology research area presented a plasma unit they had developed themselves for the interior coating of small hollow articles such as medical syringes. The coating can increase the barrier effect and media resistance and also reduce friction without the need for silicone oil that was previously used as a lubricant. On the IKV stand, the scientists demonstrated live the automatic coating of plastic syringes, including the handling of specimens. The visitors were able to test the friction-reducing effect on coated and uncoated disposable syringes and compare the two. 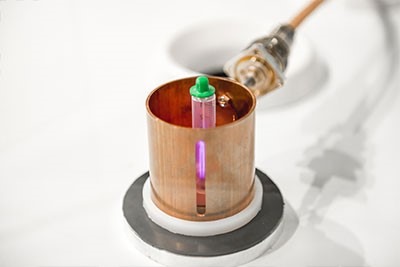 Events at the show

Apart from having its own stand, IKV also participated in various events and activities during the show:

On the “Science Campus”, IKV scientists were on hand all day to provide information on the topic of Industry 4.0 with a live link to the automated injection moulding process on the IKV stand.

On 18 October, the “Tape Technology Information Day @K”, scientists from AZL and IKV presented the results of a large consortium study on tape inserts, which offer enormous potential for injection-moulded parts. The aim was to inform visitors about the technology, bring project partners together, and identify topics for future cooperation.

The subject of circular economy was tackled during the talk entitled “Young professionals in the plastics industry”, which was held as part of the VDMA Circular Economy Forum. Lara Kleines, M.Sc., and Lars Kraus, M.Sc., who work as scientific assistants at IKV, were on hand to answer questions. Examples of the questions there were asked included why they had decided to study plastics technology, what made plastic such an interesting material for them, and how they felt personally about the subject of recycling and circular economy. Apart from that, they reported on circular economy projects they had been tackling at IKV and also covered their own career prospects.

On the morning of 21st October, 108 plastics science students travelled in three buses from Aachen to Düsseldorf. They were delighted at the generosity shown by a number of companies to sponsor the visit by donating entrance tickets. The participating students and IKV would like at this point to thank them very much for their support.

IKV scientists guided the students around the show in small groups. While this was already an impressive experience, the participants were also given guided tours of various stands by the exhibiting companies, and had plenty of opportunity to ask specific questions. Here, too, our thanks go to the 38 companies from a broad cross-section of the industry who took the time to offer guided tours for the students.

In parallel with K 2019, IKV offered on 18th October guided tours of its laboratories and pilot plants, predominantly for visitors who had come to Düsseldorf from Asia or elsewhere overseas. 150 participants mainly from Japan, China and Korea took advantage of the opportunity, including the bus transfer. After a brief introduction of the Institute, they were given guided tours of the pilot plants and laboratories. IKV is delighted with the excellent response and would like to thank the visitors for their exceptional interest. 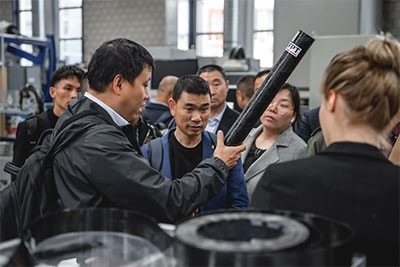 IKV, Covestro and further partners nominated for Deutsche Zukunftspreis 2019 for the development of CO2-based polyols

IKV, Covestro and further partners nominated for Deutsche Zukunftspreis 2019 for the development of CO2-based polyols

In a joint research project, a catalytic process has been developed to produce, from carbon dioxide and other substances, the raw material polyol.

The project’s aim is to turn carbon dioxide – which is regarded as one of the main causes of climate change through its emission into the atmosphere – into a valuable raw material, and thus contribute to reducing the CO2 footprint.

Involved in this project are Covestro Deutschland AG and IKV together with various other institutes of RWTH Aachen University (ITA, LTT, CAT) and TU Berlin. To analyse the potential of CO2-based polyols for the production of polyurethane mouldings, the properties of the innovative CO2 polyols were comprehensively analysed at IKV. Apart from that, the produced CO2 polyurethanes were evaluated for their usability in applications such as compact damping elements and media lines. Furthermore, the scientists analysed, using a commercial isocyanate, a total of more than 30 different polyols with regard to their processing properties (gel times, viscosities etc.) and the resultant properties in the polyurethane (glass transition temperatures, hardness etc.). From this, they derived empirical formulae to predict these properties. Based on this, polyols were identified and their hardness, tensile properties, bursting pressure properties and other characteristics such as rebound resilience were analysed. This ability to predict the properties should enable material manufacturers to develop suitable polyols specifically for a concrete application. 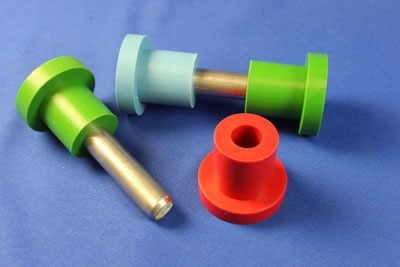 In the project it was shown that CO2 based polyols had comparable characteristics compared to commercially available damper materials.

Project was nominated for Deutsche Zukunftspreis 2019

On 11st September, three research teams were nominated with their projects for the Deutsche Zukunftspreis 2019, which has been awarded by the German President since 1997 for innovation in science and technology. Among the nominated projects was the project “CO2 – a raw material for sustainable plastics”. The decision as to who will receive this year’s Deutsche Zukunftspreis was made on 27 November: The prize, which is awarded for outstanding technical, engineering or scientific achievements or for a software and algorithm-based innovation from the IT sector, went to “Team II”, which competed for the prize with the project “Process Mining – The key technology for the future of work and added value in businesses”. The research team has developed a tool for analysing business processes and making them more efficient.

IKV is delighted with the nomination and the appreciation expressed thereby and congratulates the winner on the award of the Deutsche Zukunftspreis.

Key technologies for the mobility of the future are the development and use of new lightweight materials. This not only involves the substitution of conventional metallic solutions, but also existing plastic solutions can be improved through optimized materials, the integration of load-optimized fibre reinforcements and further functionalization processes. This results in highly resilient solutions that minimize the overall weight thanks to a lower overall material input and at the same time allow a high degree of design freedom.

The Institute for Plastics Processing (IKV) in industry and crafts at RWTH Aachen University is currently working together with its partners M-Base Engineering + Software GmbH, Aachen, SimpaTec Simulation & Technology Consulting GmbH, Aachen, BYK-Chemie GmbH, Wesel, and the Aachen Centre for Integrative Lightweight Construction of RWTH Aachen University (AZL) to develop an integrated methodology for the use of innovative hybrid materials for the cost-efficient series production of function-integrated and load-capable composite lightweight components. The hybrid materials investigated in this research project are based on the combination of Sheet Moulding Compounds (SMC) with continuous fiber reinforcements and thermosetting injection moulding compounds.

The use of thermosetting injection moulding compounds makes it possible to attach additional functional elements to the SMC component, which also increases design freedom. In the field of fibre reinforcements, both large-area textile semi-finished products such as scrims or fabrics and a local reinforcement of the SMC component using thermoset towpregs and fibre-injected preforms are being investigated. New SMC formulations with high-performance thermosets are used to optimize both the processability and the bonding properties of the individual materials.

The research project HybridSMC aims at the development of methods for process and structure simulation, for the extended determination of material properties, for the creation of material databases as well as for the development of a novel non-destructive method for spatially resolved characterization of internal properties and data traceability. In the future, the development costs of SMC-based components are to be reduced, thus making a significant contribution to the faster industrialization of the innovative process chain.

The research project “HybridSMC” (funding code EFRE-0801121) is funded by the European Regional Development Fund (EFRE). Our thanks go to all the institutions.