At K 2019, ENGEL took the next step in the large-series production of thermoplastic composites. Using organomelt, door moduels were produced. The production cell is the first in the world to use infrared radiation to heat up and form organic sheets of differing thicknesses, as well as shaping a high-quality surface in the same stage.

Thermoplastic composites are growing in importance when it comes to lightweighting in the automotive industry. There are two reasons for this. Firstly, the consistent thermoplastic approach makes it possible to efficiently integrate the forming and functionalisation of fibre-reinforced prepregs. Secondly, it makes it easier to develop recycling strategies.

In the organomelt process, fibre-reinforced prepregs with a thermoplastic matrix such as organic sheets and tapes are heated, inserted into the mould, formed there and directly overmoulded with thermoplastic. As this process undergoes further development, ENGEL is working on the production aspects of composite components with a targeted load distribution. The production cell at K demonstrated that great potential. 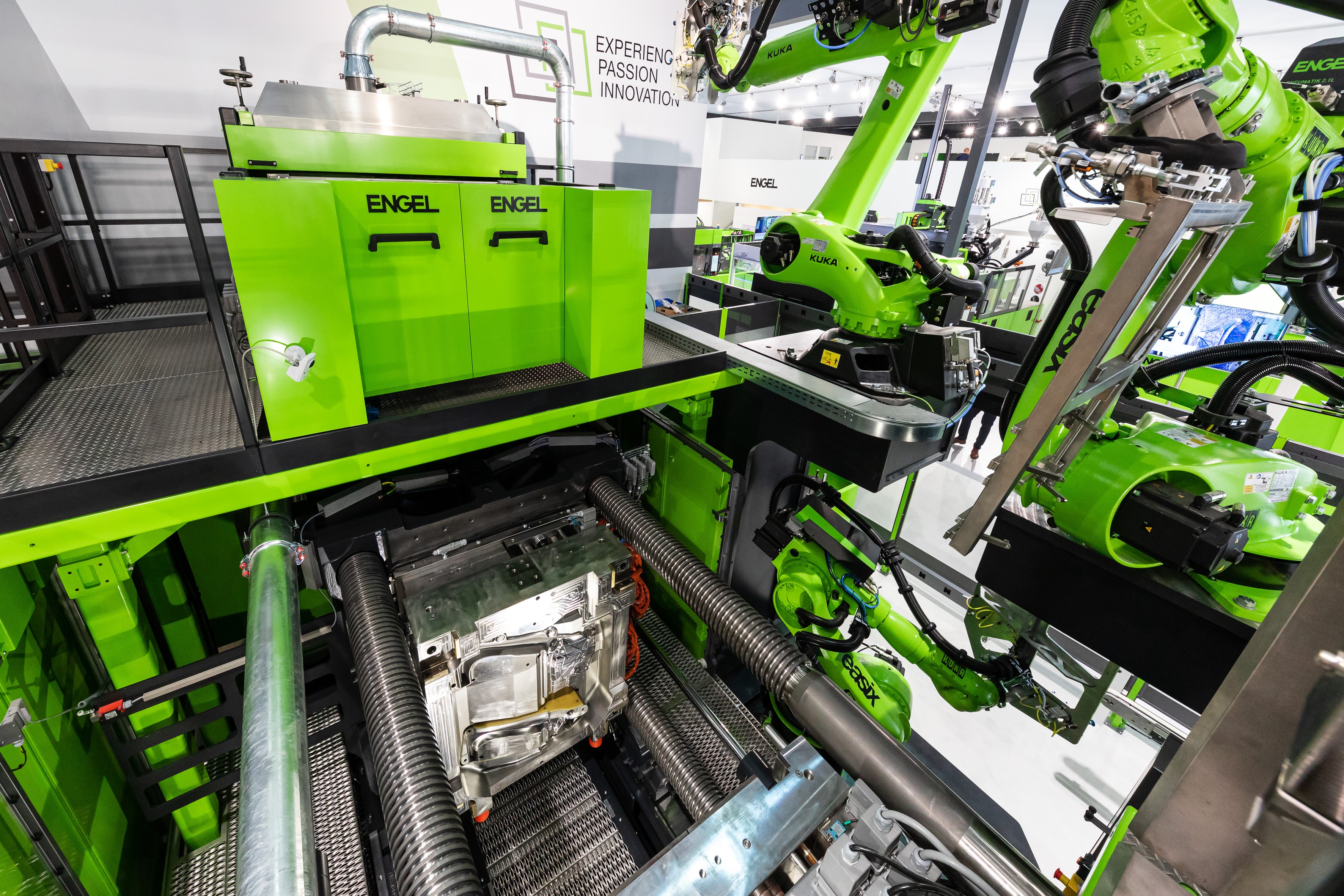 © Engel: The production cell is equipped with three ENGEL easix articulated robots all operating at the same time.

The moulding process was developed in partnership with automotive supplier Brose. This is currently the only system in the world that can simultaneously process three differently shaped organic sheets between 0.6 mm and 2.5 mm in thickness in a fully automated process involving integrated IR ovens. The different stresses on the individual component areas can be dealt with thanks to the targeted selection of organic sheets on the basis of load distribution. The door module, for instance, is more rigid in its window frame area than on the inside of the door.

One of the challenges with processing organic sheets is the heating of the prepregs. Heating the material quickly without damaging is important, as is a fast and straightforward transition to the mould. The production cell includes two integrated IR ovens for this reason. There is a vertical IR oven positioned directly above the clamping unit to heat up the organic sheet, which is 0.6 mm thick. A horizontal IR oven on a pedestal above the moving platen is used for the two thicker organic sheets. Both of the ovens were manufactured in-house by ENGEL. These, and the three easix robots are fully integrated with the IMM’s CC300 control unit and can be centrally controlled via the machine’s display.

© Engel: The different stresses on the individual component areas can be dealt with thanks to the targeted selection of organic sheets on the basis of load distribution.

Head of the Center for Lightweight Composite Technologies